A Life in Music

"I come from a family of musicians, My father a classical musician my two brothers guitarist and bassist. From that early age, I played every day. I started lessons with Sessioneer Simon Millest, who studied alongside Steve White (Paul Weller/the Who) with Bob Armstrong . I started playing pubs and clubs with my band at 15, moving onto festivals with Afro-Sokah Band 'Carramba' by the time I was 17. As well as the contemporary music, I also played with Chandos Symphony orchestra, and with the composer David Fanshaw on his composition 'African Sanctus'. I co-wrote a musical at 18 and began working with electronics, dance and drum & bass. Worked on musicals, Hair and Cabaret."

"On relocating to Newcastle in 1998 to study, I began working in the studio, recording and engineering whilst gigging with several projects. I continued pushing myself forward, studying many books and enrolled in several masterclasses. Before completion of my degree, I had already succesfuly auditioned for the Academy of Contemporary Music in Guildford."

"On graduation I took the place of Reuben's Guy Davis in the Band 'The Gift'. Re-naming it 'Cabbalah' we began touring the London Circuits. On completion of our first EP, we began attracting interest from Motown producer John Mills (Diana Ross, Eagles, etc.) who worked with us for the next two years. Gaining a good reputation, I worked with several other very talented outfits. The more I played, the more I got approached by people asking wether I gave lessons. I began teaching in 2001."

"I'm now playing more than ever. My main projects include -

Wedding band Up For Grabs, with the likes of Stuart Clayton (Carl Palmer's Touring Bass Player)

& Chili Peppers band 'The Funky Munks'. I have a busy teaching schedule, and endeavour to keep availability for studio & live session work  throughout the UK and Europe. 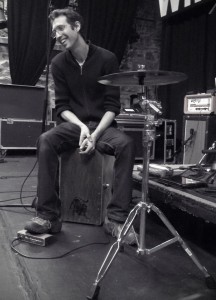 For information on the equipment Tim is currently using click on the link below.